Stewarts, acting in conjunction with US counsel Floyd Wisner and Robert Correia, has successfully opposed a jurisdiction challenge in the USA on behalf of its client Amy Owens (née Wilson), who was seriously injured in a dune buggy accident in Dubai.

The jurisdiction challenge (or “forum non conveniens motion”) was brought by the US adventure buggy manufacturer Polaris Industries Inc., in opposition to Amy’s claim for damages due to the serious burns she sustained in an accident in the United Arab Emirates (UAE) on 30 November 2017.

At the time of the incident, Amy was riding as a passenger in a Polaris tandem dune buggy being driven by the friend she was holidaying with in Dubai. The pair had booked a desert safari excursion before their departure from the UK using the Viator website. On the day of the excursion, they were given the option of going on an additional guide-led tour in a dune buggy. After setting off the guide raced ahead, and Amy and her friend soon lost sight of him. At the top of one of the dunes, the buggy tipped and rolled over, before coming to a stop and bursting into flames. Amy could not immediately release the seat belt and sustained serious injuries, including multiple burns. 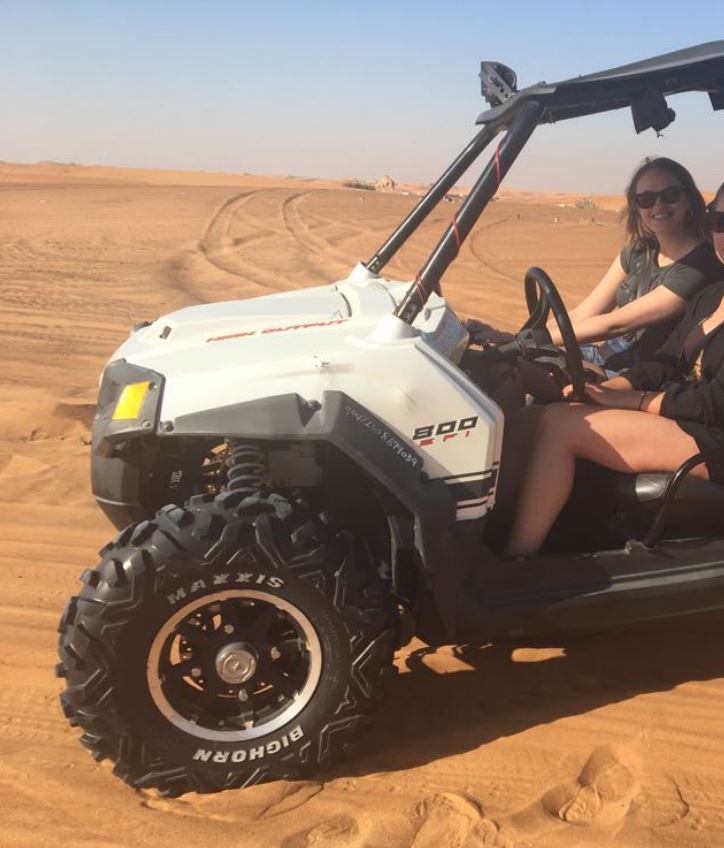 Amy instructed Chris Deacon, a partner in Stewarts’ International Injury department, in early 2018. After gathering preliminary evidence relating to the cause of the accident, Stewarts identified a long history of problems with different versions of the Polaris all-terrain vehicles. These have resulted in occupants sustaining serious burns, in some cases fatal, when the vehicles roll over. The problems date back to at least 2001 and resulted in Polaris being fined $950,000 by the US Consumer Products Safety Commission (CPSC) for its failings. Despite the intervention of the CPSC, problems continued leading Polaris’s former long-standing manager of corporate product safety to recommend a recall of products due to thermal, overheating and fire risks.

Amy instructed her legal team to issue a complaint in the courts of Minnesota in July 2019. The complaint alleges various defects in the design and manufacture of the Polaris dune buggy Amy was riding in at the time of the incident. In addition to the buggy’s defective and unsafe seat belt release system, it is alleged that Polaris has designed, manufactured and distributed a buggy for sale with a faulty and unsafe fuel line and/or fuel tank. It is alleged that the dune buggy’s fuel tank ruptured and/or leaked, fuel sprayed and was ignited and, because of the design of the seat belt restraint system, when the fire took hold Amy and her friend could not immediately escape from danger.

The design and manufacture of the buggy results, in particular, in a significant fire risk when the buggy rolls over. It was foreseeable the buggy may roll when being used off-road, which is why it was fitted with roll-cage protection.

Polaris subsequently challenged the power of the Minnesota courts to hear Amy’s claim against it, despite this being the US state where Polaris is headquartered and manufactures its adventure buggies for worldwide distribution.

Commenting on the decision, Chris said: “This is an excellent outcome in the first stage of Amy’s claim against Polaris. A dune buggy intended for off-road use requires a robust and safe engine fuel system. These buggies should not be bursting into flames at the slightest of roll-overs, which they should be designed to withstand safely. There is a long and concerning history of fire safety with Polaris off-road and dune buggies.

“Tragically, Amy has sustained serious injuries at a time when she should have been making precious memories on a holiday of a lifetime. We are pleased to see the Minnesota court rightly recognises that Polaris should be sued in the USA. Even though this horrific incident occurred in the UAE, there would be no advantage to any of the parties if Amy were forced to pursue her claim against Polaris there.

“The buggy was destroyed following the fire, and despite our efforts to date the UAE entities who ran the buggy excursion have not cooperated in producing any other records or maintenance details relating to the buggy. The courts of the UAE do not have a probing discovery/disclosure procedure. It is therefore entirely appropriate that Polaris is required to answer this case in its home state of Minnesota. We now look forward to pressing ahead with the litigation on Amy’s behalf in conjunction Floyd Wisner and Robert Correia.”

In this multi-jurisdictional dispute, alongside the instruction of US co-counsel, Stewarts also engaged Al-Tamimi’s UAE office to provide evidence on the local procedures and rules of evidence if the case were to proceed in the UAE courts.

As trials begin in the UK, where are we on the legalisation and regulation of e-scooters?