Graham Holder was enjoying early retirement with his wife Gill following a successful career as a chartered building surveyor. He was an avid cyclist, marathon runner and motorcycle enthusiast.

In September 2018, he was taking part in a motorbiking tour in Spain with his local club, starting in Bilbao and travelling through The Picos de Europa and other destinations in Spain. Unfortunately, while on the tour, Graham was involved in a serious road traffic accident and sustained life-changing injuries. These included fractures of his left femur and hip, which resulted in an amputation of the left leg, severe left upper limb injuries and psychological trauma.

On 24 September 2018, Graham was making his way to his hotel for the evening, cruising along on his BMW R1200 motorbike. The sun was beaming, the weather was glorious, and he was embracing the scenic views of the Spanish landscapes with his fellow bikers.

As he approached a junction, two cars were waiting for him to pass on the opposite side of the road. Behind the two cars, a yellow van was approaching at speed. The driver of the yellow van failed to slow down and stop, collided with the car at the junction and ricocheted across the road and into Graham’s path. Unfortunately, there was nothing Graham could do to avoid the collision.

Paramedics attended the scene of the accident and transferred Graham to Barbastro Hospital. On arrival at Barbastro, it was clear that Graham’s injuries were so severe and critical that he needed to be airlifted to Zaragoza Hospital for life-saving surgery.

As a result of the accident, Graham suffered multiple fractures to his left leg and hip, the severity of which were such that he underwent a transfemoral amputation (a surgical procedure performed to remove the lower limb at a point above the knee), multiple fractures to his left arm and ribs, and severe blood loss, which required kidney dialysis. He was placed in an induced coma and required intubation and life support. After 34 days in Zaragoza Hospital, Graham was stable enough to be repatriated back to the UK where he was admitted to St George’s Hospital to commence rehabilitation.

Graham’s family contacted Stewarts to seek advice and were put in touch with Chris Deacon, a partner in the International Injury department who specialises in representing clients following serious international accidents. The team at Stewarts was able to support Graham and his family while he remained hospitalised, initially in Spain and then on his return to the UK.

When Graham returned home, he was able to concentrate on his recovery and rehabilitation, entrusting the legal case to Stewarts who successfully secured an admission of liability from the insurer of the yellow van, Mapfre, within two months of being instructed. This enabled the focus to shift swiftly to assessing Graham’s claim for damages under Spanish law.

Throughout Graham’s case, Stewarts was able to secure interim funding from the defendant, ensuring Graham had constant access to the rehabilitation he needed to continue his recovery and, eventually, return to cycling.

Under the relevant European regulation, Article 4 of Rome II, Spanish law applied to Graham’s claim and governed the nature and assessment of Graham’s damages. Chris drew on his expertise and experience in Spanish law cases and input from Spanish law expert Ana Romero. A claim for damages under Spanish law following a road traffic accident can be complicated by the tariff-based rules and system known as the “baremo”. Chris argued that Graham should receive full compensation to meet his immediate rehabilitation needs and ensure, so far as permitted under Spanish law, he could meet the costs of his future prosthetics requirements, ongoing therapies and adaptations.

In early 2020, Stewarts finalised the terms of settlement for Graham. The settlement will enable Graham to fully adapt his new home, as well as continue his return to cycling, holidaying and the other interests and hobbies he is passionate about. The settlement will also ensure Graham has access to the best prosthetics and any further amputee rehabilitation input he may need in the future.

Rehabilitation and the return to cycling

Once Graham was physically able, he started to have daily physiotherapy and occupational therapy sessions at St George’s. The team at St George’s got Graham up and walking for his first few steps using parallel bars. While Graham made good progress at St George’s, it was his treatment at the Douglas Bader Centre and subsequently the input of ProActive Prosthetics (accessed through interim funds from his damages claim) that enabled him to excel in his rehabilitation and recovery. Graham appointed a case manager, Scott Hodder of Bush & Co, to coordinate his rehabilitation. Graham worked hard at maximising his potential and was in the gym five times a week with the therapy team working on his muscle movements and building muscle strength so that he could walk without assistance from another person.

Graham’s main goal from the outset was to be able to return to cycling, a sport he loves, as well as travelling and exploring with Gill. Before the accident, he was an energetic person with a busy lifestyle, including trekking, travelling and long-distance cycling.

Graham’s drive and determination soon saw him progress with ProActive Prosthetics and move forward with the purchase of the Genium X3 prosthetic leg. As Graham continued his physical and psychological rehabilitation and recovery, he purchased a Brompton e-bike. With the addition of a cycling-specific limb and some adaptations to the bike’s pedal, by early 2020 (just over a year after the accident), Graham had achieved his dream of cycling again. The next step is for him to conquer Mont Ventoux in France alongside Gill for a second time.

During his claim, Graham was also able to use some of the interim funds secured to purchase a VW T6 Westfalia Sixty campervan, enabling him to return to his love of the great outdoors with Gill. He was also able to travel with Gill in comfort to Singapore to see his new grandson for Christmas 2019. 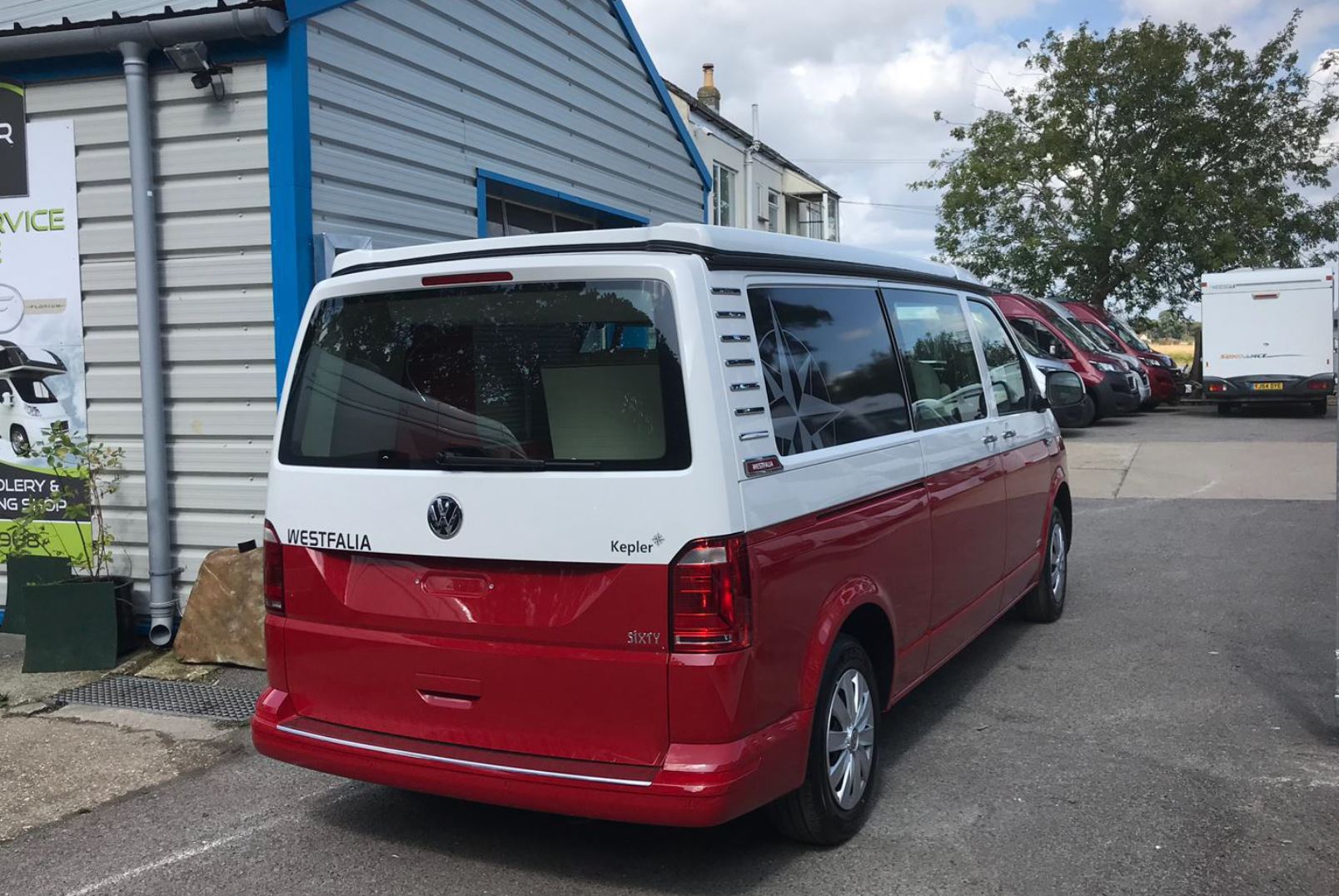 Graham says:
“Everyone at Stewarts was approachable, understanding and always responded in a timely fashion. Their level of professionalism and legal expertise was very good, and they made a difficult situation fairly straightforward. The bottom line is that Chris Deacon and his colleagues listened, responded accordingly and gave good advice. It ended up being a relatively painless process.

“I used to live a very active lifestyle before the accident, sometimes cycling up to 70 miles a day, and it’s taking time to get back to that level of activity. I have returned to cycling in a restricted way, with the help of an adapted crank system and a second limb, and I’m rebuilding my muscles and mindset. When you’re lying in a hospital bed, you think everything should come back to you easily but, once reality kicks in, you realise that everything takes longer and you have to learn and adapt.

“The settlement money has taken away some of the concern about the future. It’s enabled me to buy one of the best prosthetic limbs on the market but has also meant we can adapt our home to suit my requirements. The family did a lot of research to ensure that we had the right legal firm to represent me. They narrowed it down to Stewarts, and I am happy with the outcome and choice.”

At the conclusion of the case, Chris commented:

“It is a genuine privilege to have represented Graham and get to know him and his family over the past two years. Graham’s outlook following the life-changing injuries he sustained in Spain is remarkable. From early on, his goal was to get back to cycling. He often spoke about reaching the summit of Mont Ventoux once again with his wife Gill; I’m looking forward to the photos when he makes this happen.

“Through his own hard work and drive, both physically and mentally, the support of his family and a superb team of therapists, Graham has excelled in his recovery and rehabilitation. It was a joy to see him back cycling and to hear of his travels in his new VW campervan.

“The approach to assessing damages is very different under Spanish law, and interim funds to assist in the rehabilitation process are not always forthcoming. In Graham’s case, we were able to work constructively with the defendant insurer, Mapfre, throughout the case and when negotiating the settlement. I am proud of the result we achieved, which will enable Graham to continue the return to his very active lifestyle, adapt his home and have the best prosthetics and support in the future to meet his needs and empower him in achieving his life goals.”

Chris instructed William Audland QC of 12KBW to act as leading counsel for Graham. They were assisted by Senior Paralegals Emily Banjac and Peter Hale.