Robert sustained a C4 complete spinal cord injury after an accident at home.

Stewarts met with Robert and his wife Magdalena back in October 2018 whilst he was undergoing a period of intensive rehabilitation at the Royal National Orthopaedic Hospital. At the time, Robert was still coming to terms with his injury and sadly he was no longer able to continue working as a technician. As a result he was experiencing financial difficulties. Robert felt that he had lost everything and at one point, he expressed that he was stressed about his finances to the point where he was unable to sleep at night.

This was when the Legal Service team at Stewarts stepped in and offered to help deal with his creditors to give him some space and ease the burden of dealing with finances during an important time where he should be focusing on his rehabilitation. By contacting his creditors, the team was able to assist Robert and Magdalena with terminating or lowering their monthly payments and effectively reduced their outgoings. The team also assisted Robert with completing his benefit application forms so that he would be able to receive an income once he was discharged from hospital.

Robert was also later told that he would not be provided with a powered wheelchair from wheelchair services due to a note on his medical records about alcohol misuse that had been recorded almost a decade ago. Wheelchair services came to this conclusion despite the fact that a powered wheelchair had been specifically recommended by his occupational therapist and case manager and despite confirmation from the hospital staff that they had not observed any problems with alcohol since he had been on the unit. The lack of suitable mobility equipment subsequently led to Robert’s discharge from hospital being delayed.

The team contacted wheelchair services and reiterated the need for the appropriate mobility equipment to allow him to mobilise independently. Following Stewarts’ involvement, Robert was offered a powered wheelchair as well as a manual wheelchair and a gel cushion for suitable postural support. Without this, Robert would not have been able to return home when he did, as his discharge would have been further delayed. He would also have had to either privately source a wheelchair at his own expense, which would have been an added further strain on his finances, or remain in bed for the majority of the day which would have affected his wellbeing. 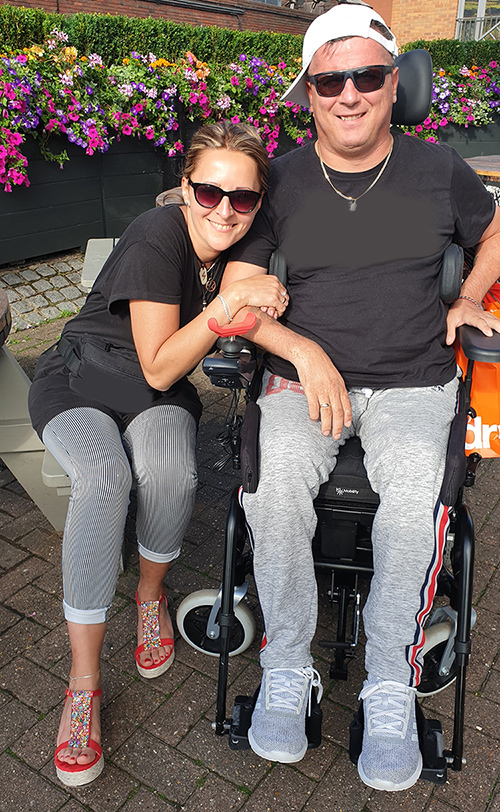 Robert with his wife Magdalena

Although Robert still has hurdles to overcome, such as waiting for a suitable property to move into, some of the additional pressures that come with sustaining a life changing injury have been relieved. Magdalena said that she found the Legal Service very helpful and that she appreciated that the team constantly kept in touch with her to keep her informed of what was going on.

This article was written by our paralegal Jasmine Chan

This article was published as part of ‘The Legal Service Newsletter’. The Legal Service is provided by Stewarts’ pro bono team as part of the firm’s commitment to help people with serious injury. The service offers free advice to patients when they need it most.

To make a referral to The Legal Service, please contact Kara Smith by phone on 020 7822 8000 or by email at ksmith@stewartslaw.com.

Breathing space: the government announces plans to alleviate the devastating effects of debt

Disability grants: what support is available to me?