The loan charge: where are we now?

While to some the arrival of the loan charge legislation feels like the beginning of the end of this saga, the reality may be that this is more like the end of the beginning, as Lisa Vanderheide and Sarah Stenton explain in Tax Journal.

‘For loan oft loses both itself and friend.’ There is no better example of the perils of being a lender or borrower than the impact of the 2019 loan charge. The loan charge came as a nasty surprise to many, with accusations aimed at HMRC of unfair and retrospective legislation. The journey to the loan charge legislation has been a long and complex one and there could still be a long journey ahead. There are significant reporting requirements associated with the loan charge; there may be complexities in determining who is responsible for paying the loan charge, problems with actual payment of the charge, and issues to be addressed and finalised long after the loan charge has been applied. Finally, for HMRC, the fight against avoidance appears to be never-ending as new disguised remuneration schemes continue to be marketed.

The end of a long journey?

The Supreme Court decision in Rangers [2017] UKSC 45 rounded off over a decade of disagreement between HMRC, tax professionals and employers regarding the tax legitimacy of employee benefit trusts (EBTs), disguised remuneration (DR) arrangements and contractor loan schemes. Many employers, employees and contractors settled over the years, usually via the various settlement opportunities offered by HMRC. However, despite success in Rangers , HMRC had a problem: they had not opened enquiries into all the relevant periods and were out of time to do so. This meant that there were a number of DR arrangements where HMRC could simply not pursue the tax on the underlying scheme. Its only hope of collecting any remaining tax was through voluntary restitution from the employer, employee or contractor. HMRC introduced the loan charge to address this issue, effectively allowing HMRC to tax all DR loans without any requirement for an enquiry into the underlying scheme.

Many voiced their dismay at the legislation, including a number of MPs, labelling it as unfair and retrospective. However, with the loan charge policy expected to bring in £3.2bn, the Treasury rejected calls to abandon the charge, stating (in its March 2019 report, see bit.ly/2WnZJZh): ‘Overall the government’s view is that the charge on DR loans is the right approach to ensure fairness for the vast majority of UK taxpayers who pay the right amount of tax at the right time and draw a line under this form of tax avoidance.’

Finance (No. 2) Act 2017 introduced the loan charge by a tax charge on outstanding DR loans made before the introduction of ITEPA 2003 Part 7A. The loan charge applies to all loans (or quasi-loans) made since 6 April 1999 which remain outstanding on 5 April 2019. It operates to tax outstanding loans as a lump sum received in 2018/19.

The loan charge has significant ancillary legislation, including reporting obligations. These obligations are contained within F(No.2)A 2017 Sch 11 as amended by FA 2018, the key ones being:

The obvious answer is that the liability – in the literal sense – appears to be that of the beneficiary of the loan, but it is not that straightforward. Indeed in 2019 alone, HMRC released four guidance notes advising on technical aspects of the loan charge.

The liability may be that of the beneficiary, but the beneficiary may not be the one making the payment to HMRC as the identity of the ‘liable party’ turns on the ability, existence, and residence of the relevant employer.

HMRC issued technical guidance on 8 December 2017 (Tackling disguised remuneration , see bit.ly/2A0uz3r) to clarify the position on the taxable entity/person. The guidance cited three scenarios where potential difficulties were identified in collecting the tax and NICs arising from the loan charge from the employer under PAYE:

Most contractor loan schemes involved a non-UK employer. As offshore employers are not required to operate PAYE, HMRC considered using ITEPA 2003 s 689 (employee of non-UK employer) to transfer the PAYE responsibility to the UK service engager. It concluded, however, that it was ‘inappropriate and impractical’ for s 689 to apply to the loan charge and specifically legislated to prevent s 689 from applying in these circumstances.

HMRC’s view is that as the third party in a DR arrangement exists independently from the employer, it is possible for a Part 7A charge to arise where the employer has been dissolved and no longer exists.

‘Every person who is chargeable to income tax for any year of assessment and who has not delivered a return of his profits or gains or his total income for that year in accordance with the provisions of the Income Tax Acts shall, not later than one year after the end of that year of assessment, give notice that he is so chargeable.’

The relevant employee/contractor is, therefore, responsible for reporting the income and paying the tax to HMRC by making a self-assessment return. HMRC also introduced secondary legislation in relation to NICs which exempts the employee and/or contractor from class 1 NICs.

Where the employer is ‘unable to meet the liability’ (i.e. they simply do not have the funds), HMRC relies on the Income Tax (PAYE) Regulations, SI 2003/2682, reg 81, which allows it to transfer the outstanding liability to the relevant employee. Regulation 81 specifically allows the transfer of liability if the unpaid tax is in relation to a notional payment, which covers all Part 7A tax charges, including the loan charge. However, a reg 81 direction only transfers the tax liability. The employer will remain liable for any class 1 NICs due.

If HMRC decides to rely on reg 81, it will initially make a reg 80 determination in relation to the unpaid tax included in the employer’s real time information (RTI) return. Once this determination has been unpaid for 30 days, HMRC will use reg 81 to direct the liability to the employee. The unpaid tax will then be collected from the employee directly.

Reporting and paying the tax liability

As discussed above, this depends on the ‘liable party’.

If the liable party is the employer, the tax was due to be paid by 19 April 2019 (by post) or 22 April 2019 (online). The loan charge amount should have been reported to HMRC via RTI using an earlier year update, which was available from 20 April 2019. HMRC issued guidance for employers on 1 April 2019 (Calculate deduction due on the loan charge , see bit.ly/2VaJVZL) to explain the necessary procedures.

Taxing the loan charge, particularly where the employee has already left, is not straightforward and we suspect many employers will have struggled to get a process in place.

It is also highly likely that some employees will not provide the loan balances to the employer. However, in those circumstances, HMRC expects employers to make a ‘reasonable estimate’ of liability based on information already known to them. A failure to do so may result in tax geared penalties for incorrect returns under FA 2007 Sch 24. It may be possible to challenge a penalty as arguably, the guidance for employers was issued by HMRC very late. However, we understand that HMRC flexibility on penalties may be limited where there has been a delay or mistakes have been made.

In the event that the liable party is the employee/individual, the loan charge must be reported on their 2018/19 self-assessment return and the resultant tax is due on 31 January 2020.

Identifying the liable party and payment of the tax liability highlights a number of hidden perils, some of which may have long-lasting ramifications:

Too good to be true…

When HMRC’s Counter-Avoidance Directorate (CAD) was created in 2014, it was done so on the premise that tackling tax avoidance is a finite process. CAD was therefore viewed as a ‘pop-up’ directorate designed to ‘drive avoidance further out of the system’. The directorate continues to grow however, as HMRC are committed to invest resource in its battle against tax avoidance. A key factor in this is the constant evolution and expansion of the commercial ‘tax avoidance market’, in particular in relation to new DR schemes.

There are many individuals who, perhaps with the advent of the loan charge and other HMRC action, have taken the opportunity to regularise their tax affairs and exit schemes. Indeed, HMRC has already collected £1bn from individuals/companies seeking settlement in the advent of the loan charge. However perhaps not unsurprisingly, the loan charge is also driving people to look for ways to mitigate their liability and ‘kicking the can into the long-grass’ is a phrase we often hear. This is notwithstanding the introduction of the promoters and enablers legislation, and the serial tax avoiders regime. These are both potentially punitive to those taxpayers and promoters who ‘have not learnt their lesson’.

HMRC is insistent that neither the new DR schemes nor those trying to circumvent the loan charge work and highlights the perils of entering into them, including the possibility of criminal action. In 2019 alone, HMRC identified 35 new DR schemes promoted since the start of 2019 and is allocating resource to not only investigate these but also draft new legislation to ensure they fail to meet their aims. If something sounds too good to be true, it usually is.

Start of a new journey

Unless there is a seismic shift in policy, HMRC will not move from its current position on the loan charge. In many ways it is too late, as many employers will have already taxed loans in April. There is also no political, legislative or financial motivation to do so. HMRC’s view is that ‘it is unfair to the honest majority of taxpayers if avoidance scheme users escaped paying their share of taxes’. Advisers therefore need to be aware that the implementation of loan charge is not the end of the disguised remuneration road as there are a number of on-going issues that both employers and employees should remain alert to.

Tax avoidance is a personal choice and one that people are free to choose as long as they appreciate that HMRC will keep fighting for as long as they need to. There are surely lessons to be learned from the loan charge and from many other bruising tax avoidance-related battles with HMRC. 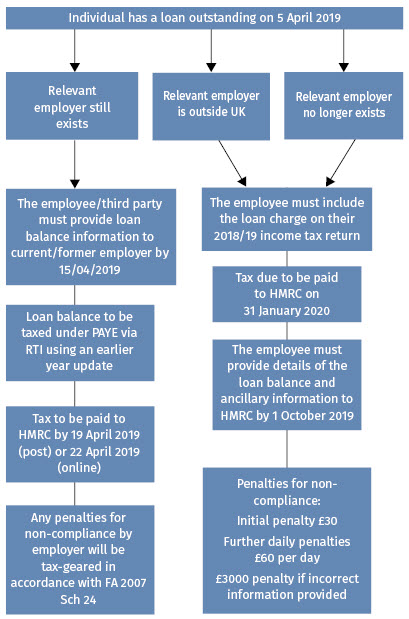 This article first appeared in Tax Journal Issue 1445, published 29 May 2019, original can be found here.

You can find further information regarding our expertise, experience and team on our Tax Litigation and Investigations pages.