The Highway Code is “essential reading for all road users, including pedestrians, mobility scooter users, cyclists, horse riders, drivers and motorcyclists”, according to the UK government website. The aim of the Code is to “promote safety on the road, whilst also supporting a healthy, sustainable and efficient transport system”.

Unless you are a keen spectator of road safety updates, you may be unaware that earlier in 2022 the Highway Code underwent some big changes. The ‘hierarchy of road users’ was updated in January, updates were made on mobile phone use, and further changes came in July for automated or self-driving vehicles. New Rules H1, H2 and H3 have been incorporated into the Highway Code to confirm the hierarchy for road users and self-driving vehicles. Lucie Clinch explains the changes here.

The hierarchy of users

Vulnerability is the priority factor in the new hierarchy. Pedestrians are at the top as the most vulnerable group, with lorries at the bottom as the least vulnerable and the most potentially dangerous to other road users. 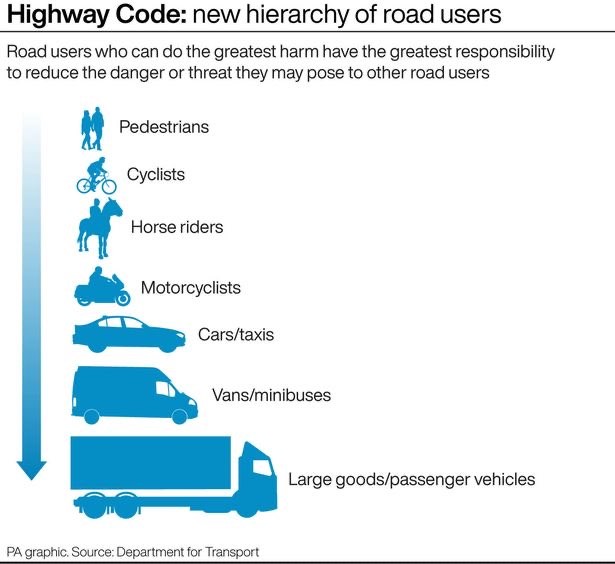 E-bikes are still classified as bicycles rather than motorised vehicles, while e-scooters remain absent from the new hierarchy despite increased use both in rental trials and prevalent (illegal) private use. It will be interesting to see where e-scooter riders end up being placed in the hierarchy of users in practice, given the vehicles’ weight (generally heavier than a pedal bike) and relatively high top speed. The riders, however, might not always have a helmet or protective clothing on, so could be considered more vulnerable than a cyclist, or at a similar level alongside cyclists and horse riders.

Legislation to legalise e-scooters is expected in the next year or so, which will hopefully prompt another update to the Code. In the meantime, on the basis that e-scooter riders are likely to place near the top end of the hierarchy, I can imagine debate will continue about how safely riders are using the vehicles on the roads.

The revisions to the Highway Code also updated rules for motorists in relation to passing cyclists, now recommended at 1.5m if travelling at up to 30mph with more space afforded at higher speeds. Drivers should pass horse riders and horse-drawn vehicles at under 10mph with at least two metres of space (rules 211-215). Many may also have missed the introduction of the ‘Dutch Reach Method’ into the Code, to encourage drivers and passengers to reach across with their other arm to open a door to avoid oncoming cyclists.

The overall goal for the revisions – in theory – is to afford higher protection for the most vulnerable road users.

The ban on using handheld interactive communication devices when driving or supervising a learner driver includes all road users. Updated in March 2022, Rule 149 is clear that:

In my own personal experience, I have seen plenty of drivers do both of these in the past week alone, but how feasible is it for the police to issue fines or penalties every time this scenario occurs? It is unreasonable to suggest every offence of this nature is going to be monitored and punishments imposed. It is also still fairly common to see people driving while texting or changing the music on their phone, despite it now being prohibited.

In July 2022, the government introduced a new section to the Highway Code for autonomous or ‘self-driving’ vehicles (AV). The new rules suggest that watching in-built ‘infotainment’ is acceptable and the Code expressly confirms that a ‘driver’ of an AV may turn their attention away from the road. On the other hand, the new section states that self-driving vehicle users “must not do anything illegal – like using a handheld mobile phone or similar handheld device.”

There are exceptions to this, set out in Rule 149, which sensibly include calling 999 or paying with a phone at a contactless payment terminal. That said, the rules are not immediately easy to follow and might be misinterpreted when it comes to vehicles, phones and infotainment.

Who actually reads the Highway Code?

A recent survey by Age Co found that only 22% of drivers over the age of 50 have read the Code since it was last revised in February 2022, and one in five drivers over age 55 admit that they have not revisited the code since they passed their test. This means that 20% (at an absolute minimum) of those experienced drivers would not be aware of any of the recent updates to the Code.

The THINK! Campaign, run by the Department of Transport, began a public education campaign following the updates in January 2022, titled ‘Travel Like You Know Them’. The campaign focussed primarily on awareness and then behaviour change. The stats above suggest that the campaign has not had the desired effect, and it seems that a lot of drivers still do not know what the changes are or what they mean for road rules and safety. It’s therefore safe to conclude that many will have missed the Highway Code updates, which could have major implications for public safety.

The Highway Code and personal injury

The Code is not legislation but it is a good practice guide with which road users should comply. The introduction of the hierarchy of road users should assist injury pleadings where the claimant is a pedestrian, cyclist or horse rider, but it remains to be seen whether the changes to the Code will have any wider impact on road safety.

Whilst a breach of the Highway Code is an element of any liability dispute, it is not in itself often determinative of liability. It is quite likely there will be scope for more breaches, particularly given the expansion of the rules together with lack of public awareness and understanding of them.

Road Safety Week 2021: What are smart motorways, and are they safe?

Autonomous driving developments and the arrival of our first self-driving vehicles. How safe is safe enough?