What are the key differences between the approaches to setting the discount rate in Scotland and in England and Wales? Julian Chamberlayne explains

On 27 September 2019, the government actuary, Martin Clarke, published his review and determination of the personal injury (PI) discount rate in Scotland. His decision is for no change, sticking to the -0.75% discount rate even though the methodology for setting the rate has changed. He comments that had he been applying the former methodology under the Damages Act 1996, in line with the approach set down by the House of Lords in Wells v Wells [1999] AC 345, [1998] All ER (D) 352, then the discount rate would now be either -1.5% or -2%.

The new methodology for calculating the PI discount rate in Scotland is set out in the Damages (Investment Returns and Periodical Payments) (Scotland) Act 2019 (the Act), which received royal assent on 24 April 2019. Not only was this a departure from the Wells v Wells approach, but it also contains a number of material differences from the new approach in England and Wales, pursuant to which a new discount rate of -0.25% was announced by the then lord chancellor, David Gauke, on 15 July 2019.

So, what are the key differences between the approaches to setting the discount rate in Scotland when contrasted with England and Wales, and how did they influence the outcome? 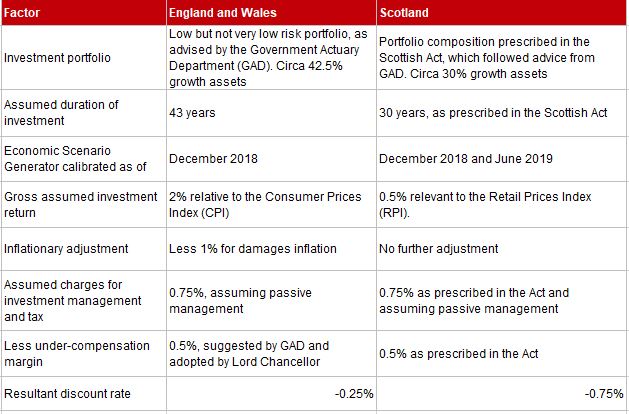 The government actuary’s determination of the Scottish discount rate shows that this is a decision that can and really should be depoliticised and placed into the hands of experts such as GAD. Even though the Scottish rate was set by the more tightly prescribed parameters of the Scottish Act, most of the key factors and resulting determinations were the same or very similar. Many of them stem from the government actuary’s preceding report for Scotland of 5 September 2018, including the concept of making a margin adjustment to reduce the degree of under-compensation for seriously injured claimants under the new discount rate regime.

Looking back to that GAD report for Scotland in September 2018 exposes the weakness of the insurance lobby’s argument that the under-compensation adjustment was a surprise. It also further exposes the fiction created by the insurance lobby that the lord chancellor departed from the government actuary’s advice when setting the rate for England and Wales. That is wrong, as is clear to anyone who has taken the time to read the GAD reports for both Scotland and for England and Wales.

So, why is there a 0.5% difference between the discount rate north and south of the border? To a large part, that relates to a different composition of the investment portfolio. Under the Scottish Act, the composition of the portfolio was prescribed and included 30% of growth assets. In contrast, the central portfolio utilised by GAD in their advice to the lord chancellor had 42.5% of riskier growth assets. It remains highly debatable whether that central portfolio is really in line with the requirements of s 4 of the Civil Liability Act 2018 to involve ‘less risk that would ordinarily be accepted by a prudent and properly advised individual investor who has different financial aims’.

However, it strikes me that there are two other factors. Firstly, the assumed duration of loss. The 43-year period adopted in England and Wales seems to be a very long period to take as the average, with the 30-year period adopted by the Scottish Act appearing to be more reasonable. This is a point that will need serious reconsideration in England and Wales at the time of the next review.

The other key difference is the date at which the economic modelling was run. The England and Wales discount rate was based on conditions prevailing in December 2018 alone, whereas the Scottish rate has been arrived at by looking at modelling not just from that date but also from June 2019. It is striking how much the economic conditions have deteriorated, with a difference on the Scottish modelling of almost 0.38% over just that six-month period. The fact that the rate can change that much in only six months rather exposes the uncertainties that claimants face in managing their investment over many decades. If you are unlucky enough to be seriously injured in the first place, you have to hope lightning does not strike twice by receipt and investment of your damages at a bad time.

Or even worse, you may sustain a life-changing injury in Northern Ireland where they still have a +2.5% discount rate, causing massive under-compensation. That position urgently needs to change.

Julian Chamberlayne would like to thank former Government Actuary Chris Daykin for his input. The original article was featured in the New Law Journal on 3 October 2019, click here to view

You can find further information regarding our expertise, experience and teams on our Personal Injury, International Injury and Clinical Negligence pages.