Alex Jay, Head of Insolvency and Asset Recovery appeared on Sky News recently to talk about the winding up petition that Liberty Commodities is facing from Citigroup.

Alex told Sky’s Ian King that winding up petitions are an aggressive legal measure. He said:

“A winding up petition is a very aggressive legal measure that creditors who are owed money can apply to a company that owes them that money, and it is an aggressive step. It can lead to the end of a business, it can ultimately to a company been put into liquidation and then being dissolved.  It comes with it some very draconian legal consequences. For example, can restrict the way a company deals with its assets and it can have an impact on the way the company carries on trading so it needs to be dealt with very, very seriously and very quickly.”

The full interview can be accessed here. 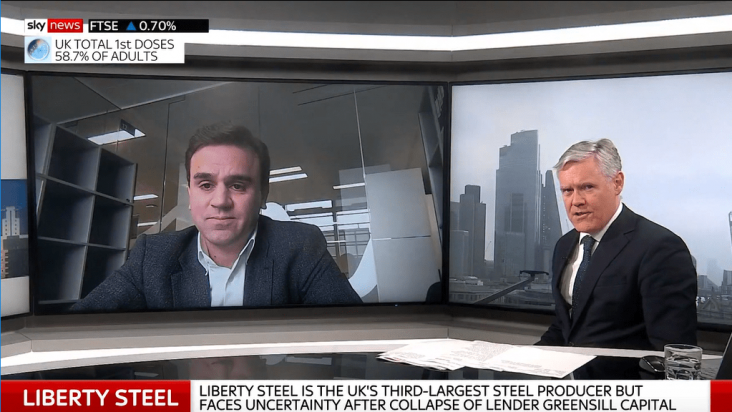 In response to Ian King’s question about Mr Gupta claiming he will fight this in court if necessary Alex says:

“This could well drag on for some time. As I’ve said, it’s an aggressive step for a winding up petition to be filed, and if a resolution can’t be found, then Liberty Commodities, which is the company that has been served with the petitions may have to look at other means of addressing matters, whether that’s by administration, I don’t know, but they will have to find a way to deal with it.”

Ian King went on to ask whether a winding up petition against Liberty Commodities could bring down the wider GFG Alliance. Alex commented:

“It’s hard for me to know that I don’t know all of the details about the structure of the group, but it is fair to say that if any company which has a number of group entities, if one of the major entities faces a winding-up petition, you can see how it could have ripple effects in wider group.”

Outside of the interview, Alex added:

“Sanjeev Gupta has indicated that he will contest the Liberty Commodities winding up petitions if necessary. He will need grounds to do so – but whether he has them or not it could be a strategy to buy time for the company and wider group. In the meantime, the GFG Alliance creditors, such as Citibank, obviously think urgent action is needed to preserve their position, and are allowing little breathing room. We could be heading for a major battle in the courts.”

Alex also spoke to BBC News, in an interview on 27 April he said, “Winding up petitions are one of the most aggressive steps in a creditors’ armoury – they can lead to the end of a company’s life and carry other very draconian legal consequences. The fact that petitions are being pursued against the Liberty businesses means that creditors plainly think they need to move quickly and urgently to protect their position”

He continued, “The winding up petitions add significant pressure and urgency to any rescue measures that are being considered. Any external financers will also be looking very closely at the winding up proceedings, in particular, what is being alleged, and what is owed, and this may be an obstacle to securing new finance.”

You can find further information regarding our expertise, experience and team on our Insolvency and Asset Recovery and Commercial Litigation pages.

Wrongful trading during the pandemic – an odd game of Hokey Cokey?