McDonald’s launched legal proceedings in the US against its former CEO, Steve Easterbrook, after it emerged that he allegedly had three consensual sexual relationships with employees in the year prior to his departure in November 2019 and kept them secret. Does a relationship with a colleague amount to misconduct, and what outcome can McDonald’s hope for in bringing a claim?

Steve Easterbrook is a rare example of a UK-born CEO of a US-based multinational. He left McDonald’s in November 2019 after admitting to a consensual relationship with a single member of staff, which was in breach of the company’s written policy prohibiting relationships between colleagues. Easterbrook received $37m in stock awards and around $675,000 in severance pay as part of his termination package.

Easterbrook told investigators that he did not have a relationship with any other member of staff. McDonald’s now say, relying on new evidence, that this was a lie, and if it had known about the misconduct at the time, it would have sacked him for cause with no termination package. Employers rarely seek to open litigation following the conclusion of a separation agreement (known in the UK as a settlement agreement), but with tens of millions of dollars involved in this instance, the approach taken by McDonald’s is understandable.

Head of Employment Joe Lappin, speaking to Sky News in August 2020, noted that “we would all expect the CEO of McDonald’s to receive a generous, lucrative salary, but the sums here are extraordinary”.

The fast food giant also alleged that Easterbrook granted an award worth more than $100k to one of the women and that he destroyed evidence of his misconduct, including photographs and emails.

This is potentially the most serious allegation of all: destroying evidence before an investigation as a means to hide the truth of circumstances surrounding a departure from an employer as a means to secure a favourable financial settlement. Joe said: “If McDonald’s had known about the serious allegations and his conduct at the time, it is very unlikely it would have agreed to pay him this amount of money.”

Chris Kempczinski, the current CEO of McDonald’s, said the company “does not tolerate behaviour from any employee that does not reflect our values”. These values, which include being “ethical, truthful and dependable”, were brought in by the company’s founder.

Joe Lappin commented: “Relationships between employees, even involving senior staff members, will not necessarily amount to misconduct. But with McDonald’s policies clear in this area, Easterbrook is clearly in breach of company rules, and he failed to live up to McDonald’s values.

“Easterbrook lied to investigators and destroyed evidence of his own misconduct. He put his own interests above those of McDonald’s. The company has done lots in recent years to improve its corporate image. It’s an iconic brand that markets itself to families, and one of its core values is integrity.”

McDonald’s will need to convince the court that had it known about the allegations at the relevant time and been able to rely on the evidence that has now come to light – photographs and emails which allegedly Mr Easterbrook destroyed – it would have dismissed him for ‘cause’, which is defined in employee incentive agreements. Dishonesty is an example of cause, and if the court agrees with McDonald’s, then the company will have good grounds for recovering the sums it paid Easterbrook.

In February 2021, an attempt by Easterbrook to dismiss the claim was rejected in the Court of Chancery in Delaware, paving the way for the litigation to proceed.

In seeking to recover the sums paid to Easterbrook, there are undoubtedly legal and commercial factors at play. There is an awful lot of money at stake, potentially tens of millions of dollars, but this is also a moral judgment. Had McDonald’s ignored the new allegations and they became public, the company would undoubtedly have faced some difficult questions.

The company’s handling of the incident has led to it becoming a defendant in litigation: investors have sued the company for failing to prevent misconduct and prioritising speed over thoroughness in resolving the matter.

In the era of #MeToo and Black Lives Matter, corporate social responsibility and setting an example are incredibly important. All companies should have these values at the heart of their business models.

Joe commented that McDonald’s and Easterbrook may seek to reach a settlement in this matter to avoid these issues being played out in court. Nonetheless, McDonald’s has sent a message to the market that it takes allegations of this nature seriously.

Employees, regardless of their level of seniority, must adhere to company rules. All staff should act in the company’s best interests and honestly. 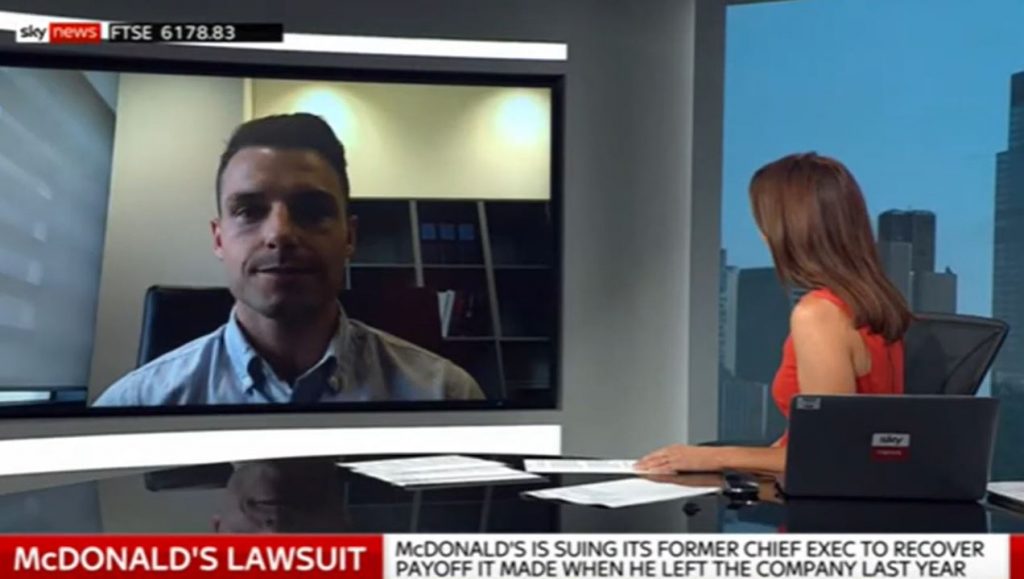 You can find further information regarding our expertise, experience and team on our Employment page.

What does the Home Office bullying case tell us about workplace bullying?

Why pregnancy loss policies are good news for employees and companies

Seen but not Heard? – Why it is important to have good mental health in the workplace

How to deal with being made redundant

Can Twitter sack half its workforce after Elon Musk’s takeover?