Stewarts has an outstanding reputation across all its specialist departments. We are widely recognised for our innovative and cutting-edge approach to high-value and complex litigation.

Our position and reputation is confirmed by our top rankings in The Legal 500, Chambers and The Times Best Law Firms, the major guides to the legal profession in the UK. We have also won and been nominated for numerous awards, some of which are listed below.

The Legal 500 provides the most comprehensive worldwide coverage available on legal service providers in 90 countries. It is used by commercial and private clients, corporate counsel, CEOs, FDs and professional advisers, as well as by other referrers of work both nationally and internationally. It is widely regarded as offering the definitive judgement of law firms’ capabilities.

You can read more about our rankings in The Legal 500 and on the Expertise pages.

First published in 1990, Chambers has established a reputation for its in-depth research. Based on thousands of interviews with lawyers and clients, the guide ranks solicitors and barristers in more than 60 specialist areas of law. Inclusion in the guide is based solely on the research team’s findings: no one can “buy their way in”.

In the latest edition of the Chambers UK directory, the firm is ranked in 16 practice areas. 54 of our lawyers are individually recognised, some for multiple disciplines. A number of our practice areas are ranked No.1.

You can read more about our rankings in Chambers and on the Expertise pages.

This guide is specifically aimed at the international private wealth market. It covers private wealth management work and related specialisms in key jurisdictions around the world, featuring in-depth editorial about the leading lawyers and law firms for wealthy individuals and families.

You can read more about our rankings in Chambers High Net Worth.

This guide researches the world’s best lawyers. Stewarts has been recognised in two international directories published by Chambers. Chambers Global covers over 190 countries across the world and Chambers Europe covers 52 jurisdictions, from Greenland in the west to Russia, Turkey and eastern Europe in the east.

You can read more about our rankings in Chambers Global and Chambers Europe.

We featured for the fourth consecutive year in the latest edition of The Times Best Law Firms survey. The survey lists us as a top three firm for divorce and family, and once again for personal injury and clinical negligence. We are also commended for commercial dispute resolution. The Best Law Firms directory was voted for by peers, being described as “the lawyers’ own view of their competitors”. The results were gained by asking lawyers which firms, aside from their own, they would refer work to.

You can read more about our Time Best Law Firm rankings here.

We are all facing exceptionally challenging times, but would like to recognise our 30th anniversary with this short video of our history and highlights. We take you from the establishment of our first office in Lincoln’s Inn Fields in London to recently leading on the first virtual case to be heard in the Commercial Court.

Our best wishes for the weeks and months ahead. 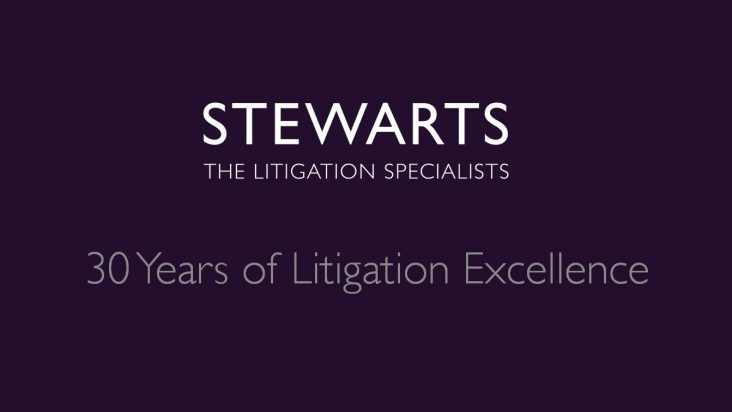 "They are simply top-rate. The lawyers are very knowledgeable and conscientious, and care about their clients"

Record success for Stewarts in Chambers High Net Worth 2021